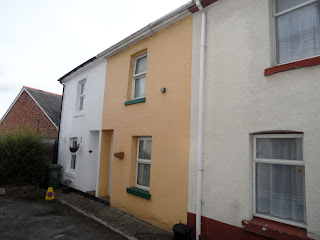 This mature two bedroomed terraced house occupies a level residential position within just a few hundred yards of the town centre which offers a wide and varied range of shopping facilities, amenities, beaches and harbour. Features of the accommodation which require improvement and modernisation include through lounge/dining room, kitchen with door leading out to rear courtyard and on the first floor there are two bedrooms and bathroom/W.C. An internal inspection of this double glazed property is recommended to appreciate the accommodation on offer.
Posted by Williams Hedge at 10:14 AM No comments:

This well established local GENERAL STORE WITH OFF LICENCE is situated in a modern parade of shops serving the well populated areas of Livermead and Upper Preston.
The shop, which has been established for many years, trades on a 7 day week basis and has the added advantage of parking facilities in the car park at the rear, as well as easy roadside parking outside.
Preston Primary School is situated nearby which means a considerable influx of children and parents particularly in the morning and mid afternoon, during term time.
The present owners are a husband and wife team, who run the business with part-time help and trade with traditional lines
Posted by Williams Hedge at 4:14 PM No comments:

WANTED
Williams Hedge Commercial and Residential Agents in Paignton now require Hotels and Guest Houses for their specialist Commercial Department, headed up by Richard Allen one of Torbays most experienced Commercial Agents.
Hotels and Guest Houses in Paignton and all areas of Torbay are now required to offer to waiting buyers from across the country.
For a confidential discussion or to arrange a FREE VALUATION please contact Richard Allen on 01803 554 322 or email richard@williamshedge.co.uk
﻿
Posted by Williams Hedge at 3:55 PM 2 comments:

﻿ ﻿
The persistence of low interest rates has helped make monthly mortgage payments for first-time buyers the most affordable for nearly eight years, according to figures from the Council of Mortgage Lenders.
The data shows that, although first-time buyers' deposit requirements have remained stable in recent months at an average of 20%, their monthly interest payments have continued to fall and now typically consume 12.3% of income – the lowest level since January 2004.
Affordability for movers also improved, with this group paying an average of 9.2% of income on mortgage interest, the lowest level since monthly records began in 2002. However, despite the improved affordability of monthly mortgage payments, deposit requirements for borrowers and the uncertain economic outlook are continuing to bear down on lending activity.
In October, 44,500 loans for house purchase (worth £6.5billion) were advanced, down from 48,200 (worth £7.1billion) in the preceding month and from 46,900 (£6.8billion) in October 2010.
Loans for remortgaging totalled 28,900 (£3.6billion) in October, down from 34,200 loans (£4.3billion) in September and 29,100 loans (£3.6billion) in October last year.  The decline in house purchase lending affected both first-time buyers and home movers.
First-time buyers took out 16,400 loans, worth £2billion, in October, a 10% reduction from September’s total of 18,200. Compared with last October, however, borrowing by first-time buyers was down by just 1%, with no change in lending by value.
Although affordability of monthly interest payments for first-time buyers improved, average deposits for this group remained static for the eighth month in a row. Improved affordability for first-time buyers mainly reflects lower interest rates.  In October, the take-up of repayment mortgages increased yet again, to 97% for first-time buyers and 83% for movers.
Paul Smee, CML Director General, said: "Despite the fall in lending in October, it is possible that we will see signs of increased activity by first-time buyers in the early months of next year, as we approach the end of the Government’s stamp duty concession at the end of March. The underlying picture of the market overall, however, is level, albeit at low levels of lending activity."


Posted by Williams Hedge at 5:16 PM No comments: 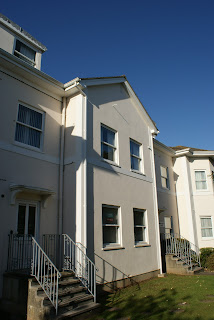 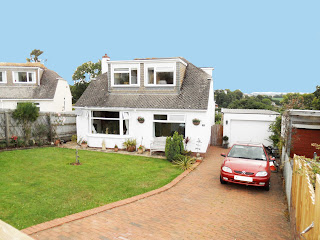 
This superbly presented and extended four bedroomed chalet style dormer bungalow occupies a residential cul-de-sac position within this sought after village of Marldon. The village offers an excellent range of facilities including local shops, church, village inn, primary school, sporting facilities and is within the catchment for the popular Kevics school in Totnes. The town centre of Paignton which offers an excellent range of shopping facilities and amenities, beaches and harbour is approximately two miles distant and is served by public transport.

Features of the accommodation which is a credit to the vendors include the lounge with central fireplace, an excellent extended kitchen and dining room with patio doors leading to sun deck and rear garden, there are two ground floor bedrooms including bedroom four which has an en-suite shower room/W.C. Also on the ground floor is a cloakroom/W.C whilst on the first floor there are two further bedrooms, including the triple aspect master bedroom and a superbly fitted family bathroom with corner bath and separate shower cubicle. Outside there is a larger than average garage, driveway parking for up to four vehicles and lawned front and rear gardens. An internal inspection of this central heated and double glazed property is highly recommended to fully appreciate the size and presentation of the accommodation on offer
Posted by Williams Hedge at 12:21 PM No comments: